I really find it stunning that so many who look in space for ”intelligent life” (and getting paid to do so) has conflated what they perceive as intelligence with polluting ones habitat.

One can also wonder if they are up for the task to look for ”intelligent life” in space when we live on a planet that is filled with intelligent life they don’t even notice. I right out question what they think is intelligence in the first place. Usually what we refer to as a sign of intelligence is ones ability, either on an individual basis or as a collective, to learn or understand or to deal with new or trying situations. This is something most life on this planet obviously can do. Just look at the very obvious example of how species after species–whether we talk about other animals (besides ourselves) or plants–ability to adapt to climate change or the stunning ability nonhumans have to adapt and survive even after the civilised human society levels their habitats and communities to further what we have taught is ”progress” for our ”intelligent” lifestyle. And yes I’m well aware that species goes extinct in an alarming rate at this point in time. But not due to their lack of intelligence but the mere fact that there is just so much one can do to the ongoing onslaught from industrial civilisation when the whole hivemind of this human society is hell bent on ”progress” over the cliff and beyond into chaos.

With that said, yes, I find it absolutely stunning that intelligence by members of the dominant culture is now being conflated with pollution. I think it’s fair to argue these people are not really looking for intelligence, they could just look out the window from their desk then and see it all over the place, but rather are looking for lifestyles that resemble the civilised human lifestyle and to me that is not a sign of intelligence but stupidity. We are clearly on a slippery slope of absolutely zero intelligence, since there is zero ability to learn or understand or to deal with new or trying situations in this society besides a few voices here and there. Climate change. Resource depletion. Expanding conflicts of male aggression due to these very evident things taking place. Zero adaptation. One would think the elected leaders by the flock would start to see ”hmm maybe this infinite growth is not such a good thing on a finite planet?” but nope… zero of that is happening.

So they are looking for this 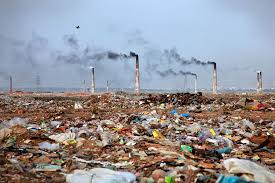 Yeah, this is truly a sign of intelligence or maybe not.

I think its fair to say that people who look for intelligence in space is really looking for stupidity in space and hence they always come up short because the overwhelming majority of species on this planet are not in fact destroying their habitats. So until someone proves me otherwise I will continue to assume that life out there, in what we call space, is not so fancy on acting in the these destructive ways either.